Capturing the Light: Yesterday and Today in Fine Art Photography. 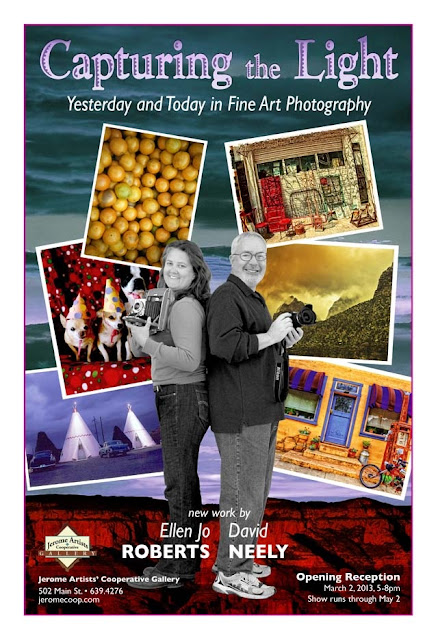 
A camera is a tool a photographer uses to make images and whether it’s a simple box with a pinhole or a mega-pixel DSLR a certain vision is required behind the lens to make an interesting photograph.

Utilizing cameras both ultra modern and vintage mid-century, these two photographers come from different generations and complement each other's distinct styles. Prescott-area resident Neely is a dark-room trained professional photographer who went digital in 2006. He captures compelling scenery and social landscapes in high tech fashion, infusing the images onto a variety of surfaces, from paper to metal. Clarkdale's Roberts is best known as a painter, but over the past 10 years has developed more than a passing interest in photography. In “Capturing the Light” she shares instant film images, born from a 1950s Polaroid Pathfinder Land Camera and blown up into large-sized prints.


David Neely, native to Washington DC, first developed an interest in photography when he was a junior college student prior to attending the University of Maryland, “I had friends who came back from Vietnam with 35mm cameras they purchased at the PX. I was always artistic, but could not draw or paint so photography was a natural avenue for me to pursue.”
He worked in photography professionally for just over 40 years, starting in Washington DC as a commercial photographer. In 1982 he moved his studio to Dallas, Texas where he worked for many of the top commercial clients nationwide including Neiman Marcus, Sears, JC Penney’s and Saks 5th Ave as well as many magazines and ad agencies.  Neely was also a contributing photographer for Playboy magazine from the late 1970s until the mid-1990s. “I was sent out on all kinds of assignments for them and traveled extensively,” he recalls, “I have pictures of my one year-old son with about ten bunnies in Atlantic City, and many nice memories and wonderful people I met and worked with. But let me tell you, it was very demanding and difficult work and back in the film days it took some serious skills and lighting to achieve the images they expected.”

In 1995 he and his wife Sheila arrived in Arizona where Neely attained teaching credentials. He taught photography for several years at Metro Tech, a career technical education high school in central Phoenix. Living full time in Prescott for the past four years, he was an Adjunct Professor at Yavapai College teaching photography courses prior to budget cuts at the school. His son carries the family tradition of education as a math teacher and head basketball coach at Prescott High School.

Now in his fourth year as a member of the cooperative, David Neely uses his keen photographic eye for art rather than advertising. “I try to interpret things I see and am moved by,” he explains, “I look for shapes, texture, lines and balance in every image I take. I want people to feel what I felt, see the composition and be excited by things that we may walk right past. I use photography as a way ‘to speak’ to others and let them know something about me and how I see and feel about things in our world.”


How did he transition from dark room to digital? “I was an old-time darkroom and film-based photographer! So I kind of went kicking and screaming into digital imaging,” says Neely, “But it did not take me long to adjust and fall in love with digital. It made so many aspects of photography so much easier and for me, more creative.  There is something still special about black and white prints made on top-notch paper in a darkroom. The feel, the tonal quality and the surface of the papers is still special to me, But, I don't miss the smell, the long hours and the tedious work required by expert black and white printers. PhotoShop and similar programs have just opened up so many new creative avenues to pursue!”
Utilizing many different software tools and plug-ins, Neely says, “I can get so involved I spend hours and hours tinkering and working on new effects and the ‘feeling’ I can bring out in selected images.”
As digital cameras continue to evolve, results that once could only be achieved on film now are possible electronically. “The mega-pixel count is so high now the ability to achieve super high detail and tonal quality, thought only possible with an eye like that of Ansel Adams with an 8x10 view camera, is now being achieved with the top end digital cameras.”


Complementing the high tech future, Ellen Jo Roberts lands from an opposite direction, entrenched somewhere deep in the 20th century, though with images no less instantaneous. “I probably have a tendency to be anachronistic in general, and I think this is what initially fueled my interest in vintage cameras and film photography. Though, as I learned more and became more skilled with the equipment, I grew to adore the results obtained from shooting on film,” the painter explains, “The capturing of the light burning images onto the analog materials lends a sense of time that is very human and tangible.” Though many imagine film has gone extinct, a vast culture of film photography remains active. “Ironically,” says Roberts, “it’s the internet that keeps film alive, with on-line communities devoted to analog photography. The enthusiasm for film is similar to the music scene’s vinyl album culture. Teenagers are shooting photos with cheap plastic 35mm Holgas and The Impossible Project’s SX-70 instant film.”

A native to Chicago, Roberts graduated from Northern Illinois University with a Bachelor of Fine Arts degree in painting and soon afterwards married and moved west, arriving in Arizona in 1995. She and her husband Chad lived in Flagstaff and Jerome prior to settling into a historic brick bungalow in Clarkdale in 2001. She has been a member of the Jerome Artists Cooperative Gallery since 1997. With a stable of analog cameras at her disposal, Roberts is never without one, always at the ready to capture the joy of the world around us. “As a painter, I have a natural enthusiasm for color, composition and the play between light and dark, but I also like to capture funny juxtapositions. The little moments of small town life out west. Roadside America. Arizona. Vintage cars, motels and old signs. Double exposures, color flashes and long nighttime exposures are fun. ”

She is also perhaps known for photographing her three small dogs, Floyd, Ivan and Hazel, each of them very patient for the lens. “I am definitely inspired by William Wegman, and the creative costume work he did with his Weimaraners.”  Her 1950s-era Polaroid Pathfinder Land Camera is quite the conversation piece, always attracting attention when popped open, bellows extended. “People go nuts when they see the camera,” she laughs, “It’s as big as a Buick, very cinematic and eye-catching. They say, ‘Oh! I haven’t seen one of those in years! Where do you get film for it?’ ”

﻿
Originally made to take a now extinct instant roll film, the camera was modified to take pack film, which is still manufactured. Though she counts her 1954 Argus C3 35mm as her other favorite camera, all of Roberts’ work in Capturing the Light was created with instant film, either expired Polaroid or new Fuji. “Though Polaroid quit producing instant film in 2009, Fuji still makes new peel-apart instant film which fuels many of my Polaroid cameras. ‘The Impossible Project’ is a New York based company which bought Polaroid’s factory in the Netherlands so that they could manufacture integral instant film again.”
Roberts does no post-editing to the images other than straighten the scans and remove wayward dust.
“Photography is a bit like life in that you’re continually solving puzzles and problems,” she says, “As I size up a shot I have to make adjustments to the speed and the aperture, the angle and the distance, to best capture and share what I am seeing and what feeling I am trying to convey. Because it’s film, it’s expensive, and I have to put extra thought into each image before I click the shutter. If it works as I saw it in my mind, it’s a victory.”

Both Neely and Roberts share an admiration for each other’s photography and can appreciate the skills, ideas, experience and vision shared. “David captures an electric quality of light in his images that makes the viewer feel a calming energy. His photographs are always very uplifting,” said Roberts of her show partner, “He’s a great champion of photography in general, always very enthusiastic and encouraging.”
Says Neely of Roberts, “I love her approach to image making and her desire to keep the older tools of the trade alive and prospering! Once I saw some of her Polaroids and images from her vast array of vintage cameras I knew we were a perfect match.”

The opening reception for “Capturing the Light: Yesterday and Today in Fine Art Photography” takes place from 5:30pm –8:30pm on Saturday, March 2nd, coinciding with Jerome’s popular ARTwalk. Refreshments will be served. The show runs through May 2nd. The Jerome Artists Cooperative is open daily 10am-6pm. For more information visit jeromecoop.com