Each Holiday Season the Jerome Artists Cooperative Gallery puts on a special show featuring diverse works from all member artists. Over the years this show has become a Holiday shopping tradition for Jerome and the Verde Valley. As one patron recently put it, "I love Christmas shopping here... Its the anti-mall!"

Posted by JAC Administator at 11:13 AM No comments: 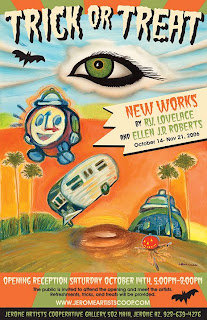 “From a ‘dramatic mental laboratory’, images are converted with odd humor and illusionism”, said Jerome artist Rick Lovelace in an attempt to describe his “Retro-Vision” pop surrealist style of painting. Lovelace’s newest works of pop-surrealism debut in the “Trick Or Treat” featured artists show with fellow painter Ellen J.D.Roberts. The two last partnered up for the very well received and well attended “Little Monsters” show in 2003, and “Trick or Treat” promises to bring more of the same fun.

Lovelace and Roberts are former neighbors who still maintain a strong friendship, frequently meeting up to enjoy martinis, rancid grade B horror films from the 50s and 60s, and compare their collective collection of kitschy artifacts. With influences ranging wild and wide-- dreams, “bad sign painting”, petroglyphs and road trips-- the two are connected by common vocabulary and subject matter though their styles are vastly different. Lovelace's style is clean and controlled, airbrush and mixed media, while Roberts makes a mess of the canvas with oil paint and pastels, carving into the painting with layers of texture. For the show promotional poster the two daringly mixed together their very different styles into one painting, a perfect blend of minimalism and maximalism.

"Phantom storytelling is always the key to unlock interpretation," declares Lovelace, perhaps getting right to the heart of "Trick or Treat's" theme. Phantom stories and ghostly memories-just in time for Halloween!

Posted by JAC Administator at 10:52 AM No comments:

What Goes Around • The Wearable Art of Christy Fisher

Everbody's heard the saying, "what goes around, comes around." It's a catchy way of reminding us to watch what we do, lest it come back to us. Cosmic inflections aside, such a saying may also speak of more concrete nuances, reminding our consumer-based culture that nothing is every really gone. That all of our waste will someday come back to haunt us.

Daunting, yes, but such intimidating ideals may also be inspiration, as is the case for designer Christy Fisher. The Jerome-based artist began her career in the fashion industry as a model at the age of 15. During her ascent to the top of her field, designing clothes for rock stars (Hendrix!) and closing mega deals (Disney!), Ms. Fisher began to see the "ugly side of the industry."

"The fashion industry is based on waste," she explains. "Fashion that's in now will be out in six weeks." And unfortunately, when a trend goes out, it gets taken to the curb. Literally. In a culture of supply and demand, the waste will continue to collect.

But what's to be done? Must the grind of the capitalist machine running our culture come to a screeching halt? Or can we unearth new ways to alleviate the build up of excess waste that comes from oir ever-changing industries? Can we learn to be conscientious capitalists? Kind hearted consumers?

According to Christy Fisher, we can. Her motto is "reclaim and reuse." To take waste and make it consumable again. Rather than buying fabric off of the bolt like most, she intercepts textile on its way to the landfill. Materials for her jewelry are equally raw: glass bottles, dishes and tin cans from the local dump.

Her wearable work then brings together these vintage elements with modern twists. Fabric from old dresses and silk shirts are digitally printed with contemporary designs. Recycled tin cans are turned into jewelry in her new line of "Trashion." Her retro-techno focus is the basis for her new exhibit, "What Goes Around."

The show opening coincides with the first night of Jerome's Art Walk, September 2nd. The public is invited to the opening gala from 5 - 8 pm, for refreshments and live jazz provided by the Milt Cannon Trio. Busy that night? That's ok - the exhibit will run through October 11th so you'll have plenty of time to get your trash on.

Posted by JAC Administator at 10:36 AM No comments:

Wood turner Blake O'Neil and pastel artist Wanda Wood joined forces this summer to bring their show "Into the Woods" to the Jerome Artists Cooperative Gallery.

Posted by JAC Administator at 10:28 AM No comments: This summer the Jerome Artists Cooperative celebrated their 10th anniversary with a major party on the evening of Saturday, June 24th. Food! Beverage! Live music! Prizes! New artwork! It was indeed the place to see and be seen, as “the Co-op” has been an important outlet for town social behavior and cultural spirit for the past 10 years. Hosting regular “featured artist shows” galas, including a sharing of their show space with Jerome Kids Art Workshop each summer for many years, the gallery is an integral part of the tightly woven art community. “It thrills me we’re successful,” said longtime Jerome resident and classical realist Anne Bassett, “It thrills me the level of competence among all of these flaky artists.”

Currently featuring about 36 exhibiting artists and always accepting applications for more, there is a wide range of different media and subject matter on display. Artists come from as far away as Prescott and Sedona, but the majority reside in Jerome, and the outlying Verde Valley.

Posted by JAC Administator at 10:08 AM No comments: