Looking the Other Way 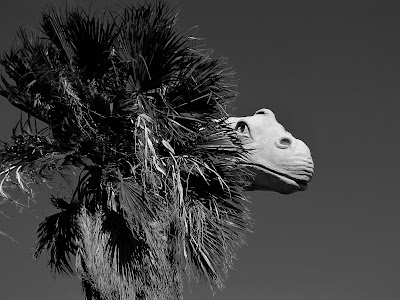 "Looking the Other Way"
Photography by Mark Foltz
April 23rd-June 2nd, 2010
Opening night party on SaturdayMay 1st, 2010
Mark Foltz is a man of many talents and many hats. He is a jazz musician, a gourd artist, a photographer, and he truly does have a great collection of unique chapeaus. You may see him sporting many different styles upon his noggin. “I've worn a lot of different hats. They've all fit me at one time or another," said Foltz, a member of the Jerome Artists Cooperative Gallery since 2004. Perhaps best known for his gourd art, photography currently “resonates” the deepest with him, and is the medium he chooses to explore in his newest show at the gallery. “Looking the Other Way” opens May 1st, in conjunction with the popular Jerome ARTwalk.
“Photography is my ‘second creative incarnation’, after music,” says Foltz, “Gourds are my ‘third incarnation’. The last few years I’ve been splitting my head in two directions with photography and gourds. I thought it was time to focus on one thing for a bit.”

The title of the show comes from a conversation he and his wife frequently have while reviewing photos of place they’ve visited together.
“Later she sees the photos, and says something like ‘Where was THAT? I didn’t see THAT!’ We then concur that I must have been ‘looking the other way’.

What appeals to Foltz most about photography is, what he refers to as “The Moment”…
“I love finding that tiny fraction of a second Where All Is Revealed. This especially fascinates me in portraiture. When you interact with a subject, a revealing expression can pass over a face in less than a second. I love lying in wait for that, and trying to intuitively anticipate its coming. It's the photographer's job to facilitate and precipitate those moments in the sitter. That's the Real Secret of portraiture, to hear me tell it. You have to cultivate a relationship with the sitter, so that a trust develops. When people trust you, they open and reveal themselves. You just have to be ready when that happens! Sometimes, you only get a couple minutes to accomplish this.
“Equally thrilling to me is using a tool that disappears in my hand. Once I settle in to a subject, I don't think about the camera--It disappears! I know the machine well enough that it doesn't require much conscious attention.” Foltz also counts tonality as an important component of good photography, “I cut my photographic teeth on Ansel Adams' Basic Photo Series, and I've never forgotten that aspect of photography.”

"Looking the Other Way" will feature much of what Foltz refers to as "The Moment", "Whether it's a fleeting expression on a face, or lighting on a rock that hasn't moved in a thousand years, there's a moment. A moment of my choosing where the essence hides. I'm always looking for that. The show will be a gaggle of these moments.” 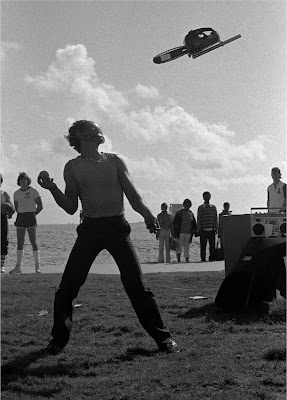 Foltz was born in Akron, OH. and raised in Cuyahoga Falls. He was an MP in the US Army in 1969-1970, and later graduated from Kent State with a B.S. in Photo-Illustration in 1975. He moved to Los Angeles in 1976, making a career as a computer whiz and graphics genius. "16 years in L.A. was a major education for me in the School Of Life!," exclaims Foltz. In 1992, he and Diana moved back to Akron, and in 2003, they finally landed in Lake Montezuma, AZ, which he refers to lovingly as "Mayberry-of-the-Desert". Diana runs "Two Feathers Healing Arts" in Lake Montezuma.

"I got my first camera about 1960, an Imperial Mark IV. Got my first 'real camera', a Pentax Spotmatic around 1968," recalls Foltz, "In those days, I was still a working musician, so my photography only happened sporadically. I really started to concentrate on photography in 1971 when I started at Kent State. I had decided to let go of music for a while, and declared my major in photo-illustration. The photography program was within the School of Journalism and a little too straight for me, so I usually had a silk-screen printing class going at the School of Art's print studio right down the hill from my photo classes and darkroom. It was a nice balance."
Foltz currently operates from a small stable of cameras, both film and digital. He uses two Nikon film cameras that he's owned since 1976, with four different lenses, a handful of filters, and Tri-X film. "Just this year I got a Canon digital camera, with a whopping big zoom lens; 12 megapixel. It's the first digital camera I've felt good about! I'll have both film and digital work in my show". 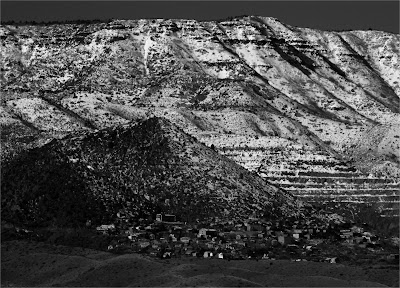 "Looking the Other Way" opens May 1st, 2010. A gala fiesta will take place opening night from 5:30-8:30pm, featuring refreshments, jazz tunes, and a chance to meet the artist, a most interesting and charming fellow. The show runs through June 2nd. The Jerome Artists Cooperative Gallery is located at 502 Main, Jerome AZ 86331, and open daily from 10am-6pm. For more information, visit www.jeromeartistscoop.com or call 928-639-4276.
Posted by ellen jo at 2:03 PM No comments: