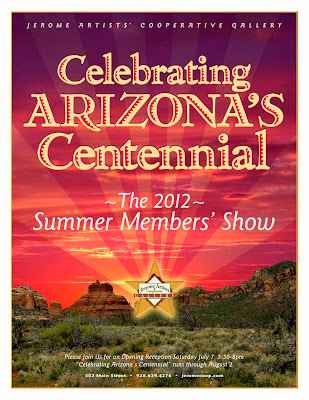 JEROME ARTISTS’ COOPERATIVE: “CELEBRATING ARIZONA’S CENTENNIAL”
By J. Yescalis
Members of the Jerome Artists’ Cooperative Gallery will join in Arizona’s state-wide Centennial Celebration when they host their annual Summer Membership Show from July 7th through August 2nd, 2012. While the weather is warm and visitors from around the country enthusiastically head for higher ground, the artists are proud to show off their own very ‘cool’ mile-high historic treasure- the old which houses the Cooperative Gallery at in .
The historical landmark still stands exactly where it was built in 1917 - unlike many of the town’s original buildings which became victims of fires and geological instability brought on by 50 years of mining the mountain. The once elegant and still awe-worthy hotel was constructed just three years after the discovery of a huge “bonanza’ of copper, gold and silver in the Verde Extension Mine- affectionately known by locals as The Little Daisy and provided a luxurious retreat from the busy, often eventful streets of the “Million Dollar Copper Camp” during the town’s ensuing boom years.

95 years later, the historic structure continues to provide a much revered shelter for the Cooperative all year round, but the gallery’s Summer and Holiday Membership shows mark a departure from normal policy which requires members to display and sell only the medium for which they have been juried at entrance. In these shows, the artists have the freedom to kick up their creative heels and bring out favorite and often surprising non-juried work to display along with the juried collections which have brought acclaim to the Jerome Co-op over the past 16 years.
Who knew that jewelers and fine artists have a secret love for basket making and photographers are sculptors in their spare time! Join the artists for the opening of The Summer Membership Show: “Celebrating Arizona’s Centennial” on Saturday, July 7th in conjunction with the Jerome First Saturday Art Walk.
The gallery is located at 502 Main Jerome Arizona, and open daily from 10am-6pm . For more information visit : www.jeromeartistscoop.com
Posted by ellen jo at 1:59 PM No comments: