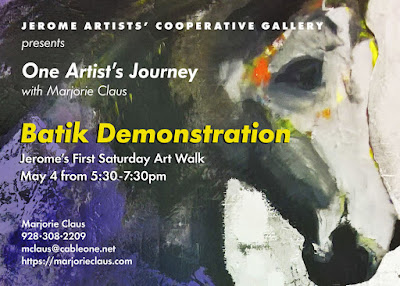 "One Artist's Journey with Marjorie Claus" continues at the Jerome Artists' Cooperative Gallery as Marjorie demonstrates her process of creating colorful contemporary batik paintings on fabric. Batik is a process that uses hot wax as a resist to dyes on fabric. In 2009 UNESCO awarded Indonesia the "Intangible cultural heritage" award as batik cloth and patterns permeate every aspect of Indonesia lifestyle. Marjorie traveled, lived and worked in Indonesia and Singapore from 1974-1982, which formed the basis of her broad experience with batik. Please join Marjorie for a demonstration of batik, and a reception for the artist on Jerome's First Saturday Art walk, May 4, from 5-8pm. Refreshments will be served. The show runs till May 29. OPEN DAILY 10AM - 6PM. 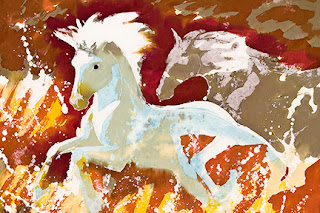 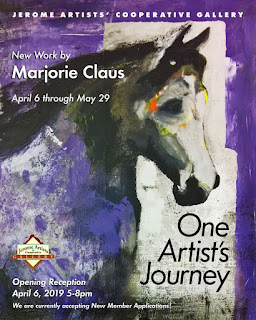 The art of contemporary batik and mixed media collage works are featured at the Jerome Artists’ Cooperative Gallery in a presentation entitled, “One Artist’s Journey.” Marjorie Claus describes in words and pictures how an overland trip to Nepal in the 1970’s and a 7-year period of living and working in Indonesia and Singapore from 1974-1982 influenced her life and her art. There will be a reception for the artist during Jerome’s First Saturday art walk on April 6 from 5-8 pm at the Jerome Artists’ Cooperative Gallery.
Marjorie recalls how leaving her job as a book designer with Macmillan Publishing Company in 1971 in favor of traveling the world, launched her awareness of foreign people, countries and cultures. She traveled three months in Europe and Morocco before she describes how she and her sister were relaxing on a beach in Greece when they were invited by two travelers to join them on their overland trip to Nepal. Marjorie says, “What sounded like a dream, became a dream after it was over! It was a tough journey in the 70’s traveling from Istanbul through Turkey, Iran, Afghanistan, Pakistan, India and Nepal using trains, buses, trucks, jeeps, hitchhiking and flying in areas where were no roads.” She continues, “In some countries ‘the road’ was nothing more than an arrow pointing in the general direction of the way to go. Just getting to Nepal from Istanbul took 9 months of hot, rugged travel.”
The Indonesian aspect of her journey began in 1974, after working at Macmillan Publishing Company for the second time before flying from California to Tokyo, Hong Kong, and Bangkok and then winding “overland” through Thailand, Malaysia and eventually arriving in Indonesia. She studied batik in Jogyakarta and then set out to explore as much of the Indonesian archipelago as she could before her visa extensions were up. In Singapore, Marjorie procured an art teaching position at the Singapore American school for 4 years, and designed batik art and textiles for 3 years at the Merlion Batik Factory.
These experiences, clearly, were the most influential events of her life. Her interest in batik started during her college days at East Carolina University where she graduated with a BFA (Bachelor of Fine Art degree) in printmaking and painting in 1969.  She viewed batik as a colorful form of printmaking with vibrant colors and patterns; indeed, in the 60’s, batik was very colorful! Batik is an ancient process that uses resists (hot wax) and dyes (vegetable or chemical) on fabric to create color and patterns on cloth. Primitive hand tools were used to apply wax and both dipping into dyebaths and painting directly onto fabrics were the processes used to apply color. “It was quite a complex process,” Marjorie states, “for a ‘primitive’ artform.” As Marjorie mentioned, batik is probably the oldest form of applying color and patterns to cloth, and it was used in countries all over the world. Indonesia is the country that received the UNESCO award for batik as a living artform: an “Intangible cultural heritage.” Marjorie’s interest in batik has survived in her 50-year career in art.
Once the computer came into Marjorie’s life, she saw the potential of using it as a design and drawing/painting platform. She uses Photoshop to develop compositions and designs for papers she uses in her collage work. In the exhibit, there are several examples of both digital and actual collage paintings. “Collage” is an artform using paint, paper and glue to assemble an artwork by using compatible or disparate elements to create a work of art. This has now become Marjorie’s favorite medium for working. Because she can bring together all her interests in printmaking, painting, batik, and collage into a single painting, she calls this process “mixed media.” This has opened the door to how Marjorie incorporates her passion for art and travel into one painting.
Reception for the artist, April 6 from 5-8 pm at the Jerome Artists’ Cooperative Gallery, 502 Main Street, Jerome. Refreshments will be served. The show runs thru May 29. OPEN DAILY. 10AM – 6PM. 928-639-4276. info@jeromecoop.com
The Jerome Artists’ Cooperative Gallery is comprised of 35 local member-artists who work in a wide variety of media. To become a member, please stop by the gallery at 502 Main Street, or download an application at www.jeromecoop.com
Facebook: http://www.facebook.com/jeromecooperative 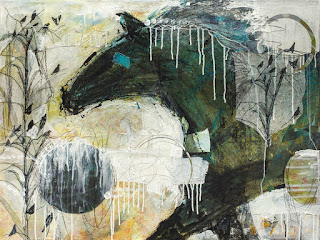 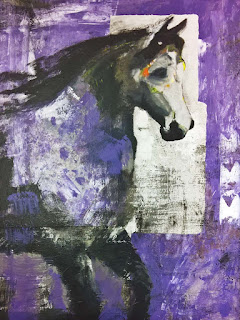