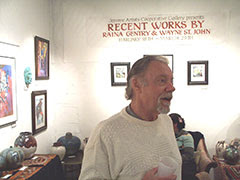 Raina Gentry, a popular artist and relative newcomer to the Jerome Artists Cooperative Gallery, had no fear of ascending great heights as a rock-climbing instructor and guide with a bachelors degree in Environmental Studies at Prescott College, but when it came to surmounting the rocky barrier of insecurity that stood between he and the artist she new was inside, it was a different story.

A self-proclaimed "dabbler" in the world of art for many years, she confesses, "I just wasn't able to access my true vision or talent, and fear kept me from really going for it"

The defining point in her art career came abruptly as she skimmed a friend's art book one day; within a week, her life turned! She enrolled at the University of Arizona as an art student.

"From that moment on I was living a different life...one I could not even of imagined." 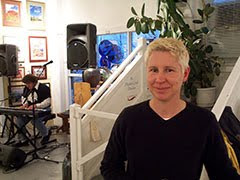 Raina currently lives in Prescott with her partner, focusing on her artwork, which is sold locally, and operating her unique business, Walls of Pompeii; where she specializes in decorative finishes and murals.

The major part of her work is intricately layered in mixed media - life drawing, painting, collage and printmaking, although she also creates large oils on canvas. Themes - often reflected in the human form - are grounded in the deeper recesses of her consciousness where she confronts the many issues that concern her as a woman, a liberal and a spiritual being. Each complex finished piece exhibits the depths of both her art education and her inner spirituality, and depicts, in her words, "the beautiful as well as the repulsive aspects of the world we live in."

Potter Wayne St. John's life as an artist took him from flying above the clouds as a 21-year Air Force F-4 pilot, to playing in the mud. As an alternative to a "rocking chair" retirement, Wayne began studying the art of pot making at Portland College in Oregon, continued his studies at the Tuscon Museum of Art and eventually at Yavapai College in Northern Arizona. In 1994-95, Wayne put his new skills to work as the resident potter at the Potted Owl Gallery in Tubac, Arizona.

Wayne continues to expand his knowledge and skills as a clay artist through workshops where he has been inspired by such nationally known potters as Yokio Yamamoto, Don Reitz, Steve Hill, Jeff Perkins and Tashiko Takaezu, among others. In addition to the beautiful bowls, plates, mugs, vases and other functional works, he has recently added 2D wall art to his collection of wares exhibited at the Jerome Artists Cooperative Gallery.

"My pottery forms are simple yet functional, and my glazes often reflect the blue and red rock tones of the Jerome/Sedona area. I let the glaze decorate my work; runs and drips are intentional, assuring each piece is completely unique."

The handmade and wheel-thrown pottery pieces are fired twice, turning the finished piece to stoneware. The 20-step process from mud to finished pot results in lead-free, microwave safe functional art which - like the continuing journey of the artist that creates them - will last a lifetime.

Posted by JAC Administator at 9:32 AM No comments: